The following is an article from http://www.solarhome.org. 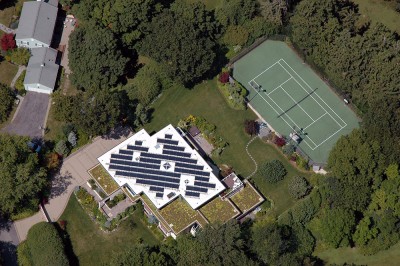 Many people find themselves wondering, “How do solar panels work?” This article will attempt to explain the answer with both a summarized version and a longer explanation.

How Do Solar Panels Work?
The simplified answer:

Silicon is mounted beneath non-reflective glass to produce photovoltaic panels. These panels collect photons from the sun, converting them into DC electrical power. The power created then flows into an inverter. The inverter transforms the power into basic voltage and AC electrical power.

That is a very brief explanation, but some may prefer a more in depth answer the question, “How do solar panels work?” Here is the more detailed response, though it still remains fairly basic:

To start off, it is crucial that silicon be better explained. Silicon has four electrons in its outer shell. However, it has the capacity rto hold eight. By sharing these four electrons with other silicon atoms and their four shell electrons, the capacity of eight is filled. When they combine with each other in this way, silicon atoms develop a strong, stable bond. This structure is known as pure, crystalline silicon.

Of course, this pure silicon is a poor conductor of electricity, as there are no electrons free to move about. In other words, the silicon is better off with impurities. To create these impurities, silicon is combined with something else.

When silicon combines with an element that has five electrons to share, such as phosphorus, a negative charge is created. Silicon can only take four of the five electrons. This leaves one free electron looking for a spot. These additional electrons are known as free carriers; they carry an electrical current.

On the other hand, when silicon is combined with an element that has three electrons a positive charge is created. Boron is a material which suits this purpose. When silicon and boron are combined, holes are created.