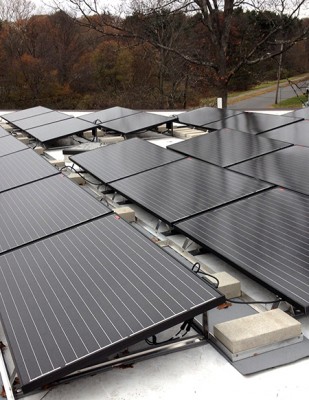 Photovoltaics were initially, and still are, used to power small and medium-sized applications, from the calculator powered by a single solar cell to off-grid homes powered by a photovoltaic array. They are an important and relatively inexpensive source of electrical energy where grid power is inconvenient, unreasonably expensive to connect, or simply unavailable. However, as the cost of solar electricity is falling, solar power is also increasingly being used even in grid-connected situations as a way to feed low-carbon energy into the grid.

Commercial concentrated solar power plants were first developed in the 1980s. The 392 MW Ivanpah installation is the largest concentrating solar power plant in the world, located in the Mojave Desert of California. Other large CSP plants include the SEGS (354 MW) in the Mojave Desert of California, the Solnova Solar Power Station (150 MW) and the Andasol solar power station (150 MW), both in Spain. The two 550 MW solar farms, Topaz Solar Farm and Desert Sunlight Solar Farm in the United States, are the world’s largest photovoltaic power stations.